A humid and stormy day at the Windmill saw Deddington host their nearest rivals Dorchester at the foot of OCA Div. 4 in the season’s first (of probably several) relegation 60 pointer.

The intensity of the day was clearly not lost on the home side as Daire barely ate half of his customary take away from the local Chinese, and even Stu rocked up before 1pm.

Skipper Rammy lost the toss and we were asked to bat under threatening cloud cover, and as expected the ball swung and seamed early on.  Gerry got off the mark second ball to rapturous applause from the hutch, thus avoiding his fourth successive quacker, and he and Rich battled to 40 before Gerry’s hamstring went twang as he turned for a swift second. The visiting captain, realising Daire was next in and sensing a Duncan / Dowling run-out catastrophe, sensibly allowed us a runner and Dave “Bet” Victor came out suitably attired to do Gerry’s running for him.  Shortly after, Rich flicked a suspiciously full bunged delivery to midwicket and the visitors were on the board, Gerry followed in similar style soon after before the heavens opened, the covers came on and we had an unscheduled 20 min break. 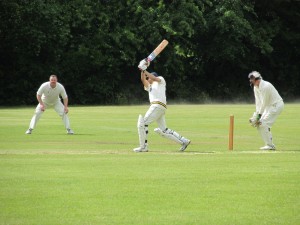 At the resumption, having lost three overs and with the rate slowing, Daire then Russ and Rammy all perished playing some big shots trying to move the scoreboard on a little. Whilst wickets fell around him, Chris Blackburn played a sensible but positive innings moving alongside Andy Stiff as joint top run scorer for the club with 3947 each.  Blacky punished anything “in the slot”, peppering the boundary from mid-off round to mid-wicket on his way to 60.  With the crowd expectant, Chris one blow from DCC immortality, and having lost about a stone in sweat, he missed a straight one and the outright record will have to wait another week.  Despite this disappointment, it was a key innings from our in-form batsman that put us in a fair position given the conditions overhead and underfoot. 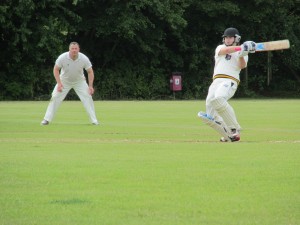 Two sweet pull shots from an excitably Ollie Redford and Shadders finishing with a strike rate of 100 saw us close on 162 for 8 from 42 overs, at last a total that could be defended.

The second innings began with DCC very much on top, outstanding spells of eleven overs each returned 2-9 for Stuart Leece & 1-13 for Rammy keeping the game in the balance, and with the total at less than 30 from 16 overs the rate required touched 7 fairly early in the innings.  Crucially though, the visitors kept wickets in hand and were able to punish anything short that came their way as they accelerated through the middle overs.  There was brief hope when Rammy returned to bowl Sharman for 42, but ultimately we couldn’t apply enough pressure and the game was lost by 6 wickets with two overs left.

The game was nearly memorable for record breaking, and nearly memorable for our first win – and as ever, we look to next week for these.  Even the news of our progress in the cup despite being shot out for 30 by Stanton Harcourt, ineligible player and all, not enough to lift spirits this time.