Annual Awards 2016 – Do you know where your pants are?

Published by Richard Munro on September 17, 2016 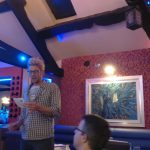 Friday night in Banbury, the red carpet was out, the paparazzi lurking as the DCC massive  rolled into town for it’s annual awards evening at Voujon.

For the evening our Hostess with the Mostess, still sporting a bleached blond barnet, was our very own Mr Sam Shadbolt.  The crowd were kept entertained with his amusing take on the events of the season, which is some feat given the mediocre performances (of the first team at least)!

Once we had been treated to a delicious Indian banquet and the liquor had flowed, the awards handed out were as follows:

Special mentions were made to Simon, Sam and to Alan Collins and Ash for all their hard work during the season, preparing  excellent wickets for us to play on every week and chasing around to ensure that we had 22 people, plus umpires, scorers, teas and all the other things needed for cricket on a Saturday afternoon.

Once the regular cricketing recognition was done, we moved on to the inaugural award 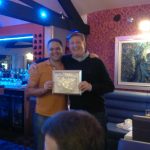 of some vaguely soiled underwear to the person or people who had managed to make an exceptional arse of themselves during the season.  The joint winners of the first “Dave Barnhill’s Pants” award, for the 2016 season were Mr Dave Victor and Mr Joe Roberts whose synchronized hamstring straining was the occasion most sniggered at by their club mates this season.

It’s not clear yet which of the lucky winners left the building with the trophy, or if the original owner of said undercrackers even knew they were missing.

Thanks also to Jill for organizing the evening, and to all that came along!