On a warm day the ten Deddy first teamers made their way to Watlington for a Div’4 clash.  Having lost the toss and being asked to bowl first we were a little trepidatious to say the least, with the hosts having posted 275 the previous week and DCC having just the one recognized 1st team bowler in their ranks.  Spirits were soon raised however when the returning Luke Jones shaped an inswinger through the gate and we were on the board.  Wickets continued to fall, with Luke finishing with a pretty respectable 4-31 from his 11 overs, including a sharp stumping from Hugh (one of three for the day), supported well by Martyn whose 1-50 was a much better spell than the numbers suggest.  At 47-4 the hosts looked to be in a spot of bother, however talisman Chris Allen (57) steadied the ship with James Howlett (24) taking the score from 47 for 4 to 123 for 4.

Dave Barnhill bowled a steady spell replacing Luke, but lacking a little penetration (never normally a problem for the skipper – apparently), and with a large total once again looking on the cards Shadders turned in desperation to our diminutive 3rd spinner, Mr Gerry Duncan, to try to break the partnership.  For those fortunate enough not to have heard “the Fringford story”, Gerry once took a couple of wickets in a game about 5 years ago and has never been shy in mentioning it since.  With all credit to Shadders for the change, a Duncan full bunger was smashed to deep mid-wicket and straight down Martyn’s throat.  With the crowd willing Dave B to mop up the tail before before Gerry could strike again, they were disappointed as he managed to snaffle two more victims, and despite one over which went for 16 his figures of 3-56 will clear many a bar and I suspect feature heavily on the bedtime story front for several years to come.  When all was done the target set was 192 to win. 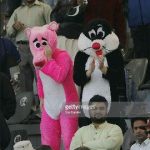 Much credit should go to the ten fielders of Deddington, in particular Ollie Roberts and Martyn taking catches in the deep, and Webby who chased the ball all around a quick and hard outfield, puffing indignantly (but saving a little lung capacity for his short stint at the wicket), and roared on by our raucous travelling support, North Oxfordshire’s very own Barmy Army – Derek and Jill.

As our reply commenced, some tight bowling from youngsters Paddy Sunderland and Jaylan Crockett piled on the pressure, Gerry being trapped LBW early without scoring, then Hugh in particular finding it a challenge to score but defending his wicket as usual with true grit.  At the other end Martyn Collins (43) played solidly and occasionally found the boundary rope to keep the scoreboard ticking over although we were always a way behind the asking rate.

The next bowling change of Charlie Fitchett and Dave Hansford tightening the screws further. DCC held their nerve despite losing regular wickets, then, with overs running out and some impetus required,  Oliver Roberts played some nice shots and also rode his luck a little for his 40 that put is within reach of further batting points, running several quick 2’s with Webby close to the end before ultimately finishing 1 short of the next points threshold on 144-7, nonetheless a good effort all round, against a decent opposition who play the game in the right spirit.