Sunday the 21st and Deddington’s second team headed to Chesterton for the quarter final tie in the Keith Crump Cup. Ash was back to winning the toss, guessing correctly and choosing to field, Deddington grabbed their caps and new sleeveless jumpers and headed out onto the field in the temperate but slightly overcast afternoon. Young gun Lewis Bletchly and youngish gun James McPhee opened the bowling as usual with James McPhee striking first, which in Bletchly’s current form is slightly unusual. None the less James struck in his third over and Bletchly in his sixth to put Deddington in a great starting position. 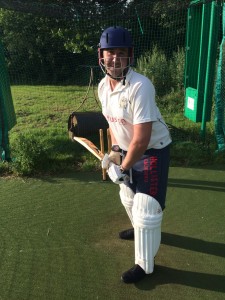 After a cracking performance the previous day Dan Rawlings and chief runner at the club as shown by his well talked about 11.2 seconds 100m speed hurtled in at the batsman. A more leisurely speed was taken at the over end as Simon the spin wizard came on to please the crowds with his usual high bowling standards. The standards of which I am told will be greatly missed next week! Oldfield took two wickets in his fourth over and another in his seventh greatly assisted by the bowling standards of Dan and his sixth wicket over Deddington looked pretty close to heading in early for tea. However, several overs ticked by before the unnerving tactics of (unlucky not to get a wicket) Rosey at one end allowed McPhee to come on and wrap up proceedings at the other much to the disappointment of Simon who had been enjoying making James walk over to shake his hand for the majority of the game.  He then had to return the favour not once but twice in the same over! With Deddington’s bowling attack and some fantastic fielding by Mike, who was seen backing up almost everyone in the field and Georgia who was seen using everything to stop the ball as shown by the bruising Deddington kept the Chesterton team to a respectable 129.

This led Dave “the dairy drinker” Webb and Ollie “I have to do better than my dad” Roberts to head out to the square. Ollie returned 8 runs later and Mike added 7 runs to the total before returning himself. Although the shots were great and the standard of cricket was high Deddington relied on injury prone Webb to stick tight. This did mean however that others came and went even if Webb was responsible for sending the captain back himself, maybe it was the milk or maybe the distracting cake eating crowd on the side-line, I guess we will never know. We do however know that the bat used by the captain will be about next week even if it was flung towards the ground in the changing room the question is, will webby? Georgia added to the score as well as Older-Oldfield. Many will be familiar with Deddington’s notorious leisurely style of batting but after the opening bowlers were seen off Webb and Oldfield began to unleash. Dan Rawlings rushed to put his pads on, whether it was because he was soon to be in or because of the scenes the previous day when he had seen such athleticism from another “experienced” player who had then needed to be carried off we are unsure but before long the show was over for the fans as Webby exited the square. 1st team star several weeks ago Chris Rose headed out to see if he could bring an end to the game that was now very much in Deddington’s favour with the score at around 110 with 4 wickets remaining. Rose returned to the clubhouse with a well needed and respected 6, as a man quickly becoming known as Forrest Rawlings not for his ping-pong skills but running speed headed out to meet Older-Oldfield in the middle.

Opening bowlers McPhee and Bletchly watched from the side hoping that the game would be soon polished up and drinks could begin to be drunk. However, there was one final twist in the tail and the unorthodox style of batting that the youngest Bletchly rarely gets to showcase was shown at number ten with a quick 10 in a mere 5 balls showing the composure of Jordan Spieth to help bring home the win, even if he did tell Rawlings to play for the quick singles. Some say this was the plan all along to get the strike but once the players had returned from the pitch with a solid win and a Semi-final spot secured nobody could care less. A well captained, enjoyable and highly exciting game played on a rain free Sunday afternoon.