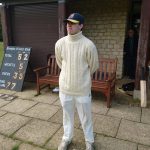 Also known as “turtle” for his ridiculous white roll neck (non regulation) jumper he dons in the colder fixtures during April/May. Lewis is a product of the former junior club and has been playing in the senior teams for the last 3 seasons. Widely known for his optimistic attitude (much like his Father!!??) and clearly not to be mistaken with just being the Village Idiot – with his encouraging nature he really is one of the nice guys of the club. Lewis is a no nonsense batsman who if you don’t put it in the right areas he will attack from ball one, quite simply a brilliant fieldsman and a nice wee dibbly dobly bowler (complete with absurd run up) often asked to fill a gap with overs remaining but always seems to take a few wickets. An example of Lewis’s kind nature was when he famously suggested in a committee meeting that we send our unused club playing kit (pads, bats, helmets) to third world nations to do our bit for charity, so if you find yourself in any less than privileged country with it’s inhabitants walking around in full cricket kit you know where it has come from. Good to the core, Lewis is a fine cricketer and will probably end up running the club when he gets older.