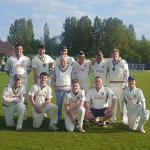 14th May 2016 and the 2nd XI had their first home game of the season. Our visitors were Swinbrook 2nd XI.

Skipper Ashley Clark won the toss and chose to field first on a dry, bright but slightly chilly afternoon.

Veteran dibbly dobbler Dave Barnhill opened from the Hempton Road end and the elegant off spin of Simon Oldfield graced the other end.

The Swinbrook openers batted as though they had a train to catch. Dave and Simon, however,  quickly put a brake on things, taking 2 wickets each and reducing them to 40 odd for 4. The question we were now asking ourselves at this point though  was “would we regret dropping their number 4 bat, James Bartrip, when he was on 0”. Dave picked up another 2 wickets leaving Swinbrook at 75 for 6, but Mr Bartrip was still  there, holding things together and slowly building his own score.  He found a partner, Ryan Dadge batting at 8. who was happy to hang around and attack when he felt he could. When he did he hit it hard, very hard. Dave ( 4 for 40 ) and Simon bowled through their overs and were replaced by Adam Moody and Will Oldfield.  Will, suffering a bit from an injured shoulder, wasn’t quite on top form but did enough to take out the stubborn Bartrip for 43 ( which means “yes we did regret dropping him on 0” ). Adam quickly followed this with his first wicket of the day and once again we felt on top with the score being 130 for 8. Again Swinbrook reacted well and a very good, and very annoying, 9th wicket partnership  ensued. Adam broke the partnership and George, having replaced Will, instantly took the last wicket to finish the innings off on 167.  More than we would have wanted but less than it could have been. Have to give Swinbrook credit for some intelligent and skilful batting, which enabled them set us a challenging target.

Tea was a team effort but was set up and tidied away by Jemma Clark – thanks Jemma, much appreciated. During tea there was the normal high brow conversation and we found out that Dave does not understand the appeal of lemon drizzle cake, carrot cake or apple pie. Seems sensible thinking to me but everyone else thought this was very weird.

We knew the pitch was a good one for  batting and although some of the boundaries were long, very long,  the outfield was fast.  Even knowing these facts, we also knew we  would have to bat well and that partnerships were vital – even a  small collapse  would cause problems.

The decidedly youthful openers, Lewis Bletchley and Niall Murphy, set about the chase in their differing ways. Lewis was all attack and Niall was more circumspect. It worked well as they put on 30 for the first wicket, before Niall perished for 9, Lewis having scored the lion’s share of the runs in boundaries. This pattern continued as Neil Goward, Steve Welch and Ashley Clark all shared useful partnerships with Lewis, in which he was the main aggressor and run scorer. Lewis’ maiden 50 was quite rightly received  with a big cheer from his team mates and a massive beaming grin by him. He carried on going, seeming determined to win the game all by himself. Having got to 76, many of the runs coming by way of an array of well hit leg side boundaries, Lewis fell to a catch at deep mid wicket. With the score now 115 for 5 and Lewis back in the pavilion, Swinbrook will have felt they had a chance. They reckoned without the bludgeon of Joe Roberts and the class of George Welch.  They steadily, and relatively easily, took us close to victory before Joe had a rush of blood and got himself out for an entertaining 34, that contained no cut shots !!. Never mind, it meant Will could get in to bat and score the winning runs.  Victory by 4 wickets, with over 6 overs to spare. 30 points in the bag, still top of the division, still unbeaten and new shirts christened with a win.   Must add that this was a toughly enjoyable game, played on a decent track, in the right spirit, against a nice opposition and well umpired.

Dunce of the day – Adam Moody – he drooped the catch that we nearly regretted ( it was a sitter, a complete sitter )

Jedi moment – a number of contenders but Joe Roberts takes it for a beautifully executed cover drive all along the floor that raced to the fence ( honestly Ollie, he did plat this shot )