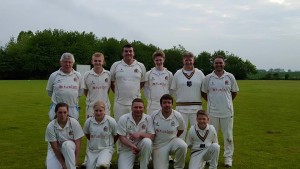 It appeared throughout the week that the seconds would struggle to field a full team come Saturday. However, a combination of sweet talking and grovelling persuaded the league to free Dave “The Brave” Webb from his umpiring duties, meaning we went into the game with 11.

We were put into bat on what initially seemed like a tough surface, especially with the Kennington opening bowlers seemingly swinging the ball both ways. Indeed, an inswinger caught Webby on the toe early on, trapping him LBW and leaving him with yet another cricketing sustained injury. At this stage, Dave may well have been thinking that umpiring would have been a better option, yet his dismissal brought Olly “Tits in the trolley” Roberts to the crease. Playing in his first game this season Roberts stood and watched early on, as his elder Joe “Root” Roberts carved away a couple of his trademark cut shots. Sadly his innings was short lived, as he was run out by his son after an attempted quick single by Olly. This was largely his own fault, as he failed to back up or run his bat in- two rookie mistakes, but he was oblivious to reason at the time, in fact as the senior Roberts headed back to the hutch the audible expletive laden mutter to his son was “you’d better get a ******* ton now or you’re ******* walking home”!

The young yet accomplished George Welch was next to the middle. Together he and Olly batted more than 25 overs, developing a partnership of well over 100. Both batted superbly, and ruthlessly took advantage of any bad deliveries. After scoring his first ever 50 for Deddington Roberts began to up the run-rate, adding a further 34 runs to his total in a matter of overs, by this time his father had forgiven the earlier indiscretion, his anger replaced, firstly by relief and then pride and poor old Olly no longer faced a long walk home and two weeks without pocket money! He was finally caught out on 84 after attempting one big-shot too many. This did little to stunt the run-rate though as Ash Clark scored a lightning quick 50 in little over 9 overs, whilst continuing to be supported by George down the other end. After Ash and George fell for 52 and 30 respectively, useful knocks from Caitlin Leach (16), Georgia Adams and Dave Victor (both 6 n.o) pushed us up 231 for 7.

Though this total seemed enough on this wicket, a good bowling and fielding display was still required. Accurate bowling early on from Jimmy McPhee and Adam Moody meant that Kennington were still chasing almost 200 with 30 or so overs remaining. This was backed up by more good bowling from Caitlin, Dave “Bet” Victor and Daniel Rawlings who ensured that Deddington were always in control of the game. There was excellent work in the field also with a run-out apiece for Joe Roberts and Ashley Clark which was pleasing to see, particularly considering the skipper’s three dropped catches the previous week. Going in search of the full 30 points, Ash capped off his fine performance with a wicket, before Rawlings got rid of the final batsmen.

Overall a much needed 86 run for the seconds, after defeat in the opening game of the season. Good performances with both bat and ball as well as in the field was very pleasing to see, and stands the team in good shape for the future.