Each year, the High Sheriff of Oxfordshire makes awards to people who have done great things in their community.

When the chair of the local PC was kindly invited to nominate someone for this award there was little hesitation in putting forward the name of our Chairman, Derek Cheeseman.

Derek joined Deddington Cricket Club a year after it was founded in 1981 and is the clubs longest serving member. During Derek’s time serving the club as a player and committee member the club has run a 1st and 2nd Teams, playing OCA cricket on Saturdays and friendly Sunday fixtures and has also set up a Women’s and a Juniors section which Derek has supported.

Derek will no doubt thank us for sharing that he was born 21st May 1929! A very accomplished cricketer he bowled spin and was a classical batsman, still running quick singles with younger players well into his 80’s. Derek’s best figures are 3 for 16, and he still holds the 1st team record for the 10th wicket partnership; Batting with James Ransom in June 2002 against Fringford, Derek went in at no.11 at 92 for 9, he and James put on 49 unbeaten in the 6.5 remaining overs.

In 2014 he tuned out for the seconds who were a man short. The mark of the man is no sacrifice to too great to ensure players have a good game. While fielding Derek was at first slip and took a catch when the keeper fluffed taking an edge from the batsman. This got him 3 pictures and a full article in the Banbury Guardian. 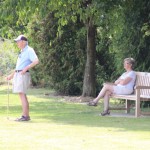 Derek and Jill are still the club’s most loyal supporters, regularly following the team both at the Windmill and at many away fixtures.  There are always words of support and encouragement however bad the performance might be, and they take great pleasure seeing youngsters from his youth coaching days scoring runs for the seniors while reminding us older players that this is no time to give up! 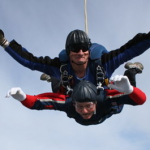 A dedicated fundraiser, in 2009 Derek raised over £1200 by way of a sponsored Skydive. More recently Derek has been the driving force behind getting the club a first class pair of outdoor nets and a bowling machine, and he is now working hard to get the Cricket Club a modern pavilion with changing, showering, and catering facilities.

Derek was presented with his award at the Blue Boar Lecture Theatre in Christ Church University, Oxford on 29th Feb 2016.

On Behalf of everyone associated with the Cricket Club, past and present, thank you Derek for your years of hard work and dedication, this award is richly deserved!