We knew it would be tough. 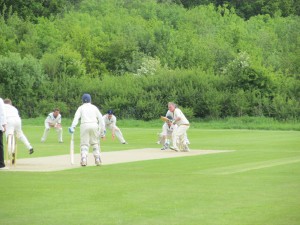 1st XI away at Kidlington

Being honest we knew were in for a tough day, being short of so many first team regulars. Sadly we were proven right.

Taking the field first, skipper for the day Dave Barnhill asked for effort, commitment and a good attitude and the lads delivered in buckets. It wasn’t enough, however, to stop the juggernaut that was Kidlington’s opening pair. Numerous changes in the bowling and field settings brought no breakthrough until the 32nd over. We only managed to take 2 more wickets as KCC closed on 283 for 3. Full marks to Tom Bozman (85) and Andy Oliver (125), they batted with control, skill and intelligence – albeit on a pretty good batting track and a quick outfield. Hard as we tried we had no answer to them. The scorecard would suggest that we bowled badly but we didn’t, they batted very, very well.

In reply, DCC slipped quickly to 0 for two (runs first in the English tradition), and it didn’t get much better as we went on. Only three players made double figures. Richard Munro (31) Russ O’Donnell (28) both batted very well, and on first team debut Niall Murphy made a brave 10, down the order making sure that Ollie Redford’s mighty Ox Sports (TM) bat  troubled the scorers. Thanks to their efforts we crept up to 92 all out. Defeat was by a huge margin, 191 runs is now our worst league defeat, the previous worst was 190, and reflected how much we had been outplayed.

Despite everything there were some positives…..

– the effort and commitment were outstanding

– our conduct and manner were a credit to the club

– Niall Murphy’s fielding was an example to all

A fitting summary is quite obvious…… hammered!!!!